It was March 13, 1845, in Leipzig, Germany, and after six years in development, Mendelsohn’s Violin Concerto in E Minor made its premiere. Musical premieres are not always warmly received, but this concerto was immediately popular. Its development famously began in a letter from Mendelssohn to his concertmaster, Ferdinand David, in which he stated, “I should like to write a violin concerto for you next winter. One in E minor runs through my head, the beginning of which gives me no peace.” Today, this opening theme of the first movement is easily recognizable to general audiences, and the concerto is one that all young violinists aspire to include in their repertoires. It is truly among classical music’s greatest hits.

The six years it took to complete the concerto included a dialogue between David and Mendelssohn, with the composer incorporating the expertise of the soloist. Because Mendelssohn was not a violinist, he depended on David to provide input into the piece—both technical aspects as well as the composition itself. We do not know exactly what was discussed between the two, but we do know that there are several unusual aspects of the composition:

This famous concerto has been played around the world, often in extraordinary settings. In 1969, Isaac Stern played the third movement under the direction of Leonard Bernstein at a White House State Dinner for Israeli Prime Minister Golda Meir, hosted by President and Mrs. Nixon. 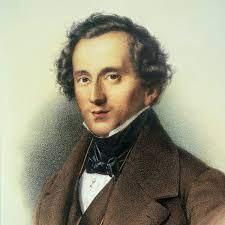