Rachmaninoff’s Rhapsody on a Theme of Paganini, one of the supreme virtuoso works for piano and orchestra, is paired with the Rhapsody on Moldavian Themes by the Russian/Polish Mieczyslaw Weinberg, composed just after World War II to honor his Moldavian-Jewish heritage. This will be the Midwest premiere of his vibrant work. Prokofiev meant for his Fifth Symphony to “glorify the human spirit,” and it reflects the optimism of future victory near the end of World War II.

This concert is dedicated to the memory of Barbara K. McCarthy. 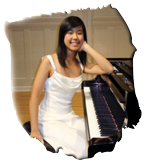 Kate Liu, 20, has been described by the Washington Post as a pianist with “a burgeoning talent and a musical poise well beyond her years.” She is currently pursuing her Bachelor’s degree at the Curtis Institute of Music with Professor Robert McDonald. Her previous private studies were at the Music Institute of Chicago, including Alan Chow, Micah Yui and Emilio del Rosario.

Kate has given recitals in many halls and venues, such as the Subculture Arts Underground, Phillip’s Collection, Salmagundi Club, Ossining Library, Bohemian Club, and Temple E-manuel, and she had the chance to perform the four-hand Schubert Fantasy with world-renowned pianist Lang Lang at Symphony Center in Chicago. In 2009 she went on a tour with the Music Institute of Chicago to the East coast, where she performed in Carnegie Hall’s Weill Hall in New York as well as the Kennedy Center in Washington, D.C.

Other than solo recitals, Kate has collaborated with several orchestras including the Montreal Symphony Orchestra, Cleveland Orchestra, Rochester Philharmonic, Hilton Head Symphony Orchestra, and the Skokie Valley Symphony Orchestra. She has been on NPR’s From the Top, one of the most widely known radio shows for talented young musicians. As a Winnetka resident, she was also featured numerous times on WFMT classical music radio, as well as the WTTW Chicago tonight television broadcast.

Besides playing the piano, Kate also enjoys drawing and spending time with friends.

Meet our soloist, Inna Faliks, at Musical Insights. She and our Maestro Lawrence Eckerling will explore the concert program in depth.

Rachmaninoff
Rhapsody on a Theme of Paganini

Stephen Hough and the BBC Symphony under Sakari Oramo at the 2013 Proms. The famous 18th Variation begins at 15:45.

Yannick Nezet-Seguin with the Rotterdam Philharmonic at the 2013 Proms concerts in London.

RHAPSODY ON MOLDAVIAN THEMES, OP 47, No 1

The Soviet Union was a place of refuge for Mieczyslaw Weinberg. Born in Warsaw to Moldavian Jews, he urged his parents and sister to leave Poland when the Germans invaded in 1939. When they decided to remain in Warsaw, he left on foot traveling eastward and eventually stopped in Minsk, seemingly out of the reach of the Nazis. The German 1941 invasion of the Soviet Union forced his evacuation to Tashkent, where he met Dmitri Shostakovich, who became his lifelong friend and major artistic influence. He moved to Moscow in 1943, where he composed for the remainder of his life. His family unfortunately perished in the Holocaust.

Weinberg was not free of persecution however; he was arrested in 1953 and believed he was destined for execution, but the death of Stalin saved him. Five years earlier his father-in-law, Solomon Mikhoels had been assassinated by the Soviet secret police, and Shostakovich and Weinberg had an agreement that if either was arrested their children would be taken care of by the other.

Despite these obstacles, Weinberg composed prolifically; his works numbered over 150, including 26 symphonies, 17 string quartets and seven operas, of which The Passenger has brought him some measure of belated fame. The Rhapsody on Moldavian Themes is an ideal short introduction to this great Russian composer. It follows the slow-fast structure typical of the Hungarian Rhapsodies of Franz Liszt, consisting of two sections of about seven minutes each, but with a strong klezmer element in the exciting finale which honors Weinberg’s Moldavian — Jewish heritage.

RHAPSODY ON A THEME OF PAGANINI, OP 43

Sergei Rachmaninoff and his family fled Russia in 1917 when it became obvious that the Communists were in control and never returned. As one of world’s leading pianists, he was able to support his family in the West through concert and recording fees. He spent the 1920s in California, New York and New Jersey, and 1930s in Switzerland, and his last three years in Southern California, where his neighbors included Stravinsky and Schoenberg.

Rachmaninoff’s 39 opus numbers through 1917 include such standards as his Second and Third Piano Concertos, the 24 piano preludes, and Second Symphony. He added but six opus numbers in his last 26 years, probably because the demands to produce concert income left little time for composing.

The Rhapsody on a Theme of Paganini dates from 1934, and ranks with the Second and Third Piano Concertos as the most popular of his works. Although titled a “rhapsody,” it is actually a set of 24 variations, in which the first variation is played before the theme itself, on the last of Paganini’s 24 caprices for solo violin. The remaining variations, predominately in the key of A Minor, can be grouped into a generally fast section (through Variation 10), a slow central section (Variations 11–18), and a fast finale (Variations 19–24). The 18th variation (in D Flat Major) is among the most instantly recognizable melodies in music, and takes the notes from a part of the theme and simply turns them upside down, called an inversion in musical terminology. There is an underlying second theme in the Rhapsody, the medieval Latin chant known as the Dies Irae, which haunted Rachmaninoff through much of his life. It is first heard as part of the 7th Variation, and makes its final thunderous appearance just before the witty final notes on the piano.

Prokofiev’s musical life, like that of Beethoven’s, can easily be split into three periods, which in Prokofiev’s case also correspond to where he lived: Russia (1891–1918), the US and France (1918–1936), and the Soviet Union (1936–1953). The music of his first two periods was considered advanced at the time, while his third period Soviet works are in a more conservative, melodious style and include most of his most popular compositions, such as the ballet Romeo and Juliet, Peter and the Wolf, and the Fifth Symphony. The question this chronology may raise is why did he return to the Soviet Union? He gave the following answer to a relative who asked that question: In the US I was always going to be the number two Russian composer behind Rachmaninoff, and in Europe I was always going to be number two behind Stravinsky, so I’d rather be number one in the Soviet Union. Ironically, current musical thinking is that he ended up number two in the Soviet Union as well, behind Shostakovich.

Andante. On January 13, 1945 Prokofiev was on the podium for the Moscow premiere of the Fifth Symphony, but the music was delayed until a barrage of gunfire ended, celebrating the crossing of the Vistula River by Russian troops. This was appropriate for a symphony “about the grandeur of the human spirit” (Prokofiev’s words), and composed in anticipation of victory in World War II. This first movement is in standard sonata form and culminates in a shattering coda.

Allegro marcato. This is a scherzo in typical ABA form, notable for its clarinet part.

Adagio. The slow movement is in Prokofiev’s most lyrical vein, highly reminiscent of the love music for his Romeo and Juliet ballet.

Allegro giocoso. The finale is in the light-hearted style of a Haydn symphony, although the main theme of the first movement returns early in this movement. What Prokofiev termed his “motor rhythms” propel the music forward, whose brilliant orchestration includes abundant percussion.