Howard Hanson titled his Second Symphony the “Romantic,” and its lush melodies have ensured its place as his most popular work (and its usage in the film score for Alien). Samuel Barber’s Violin Concerto is among the most beautiful of any concerto. The great popularity of Arvo Pärt’s Fratres has led to arrangements for a variety of instrumental combinations; the ESO will perform the version for solo violin, string orchestra, and percussion. Local favorite Desirée Ruhstrat will demonstrate her versatility by taking the solo role in both the Barber Concerto and in Fratres. 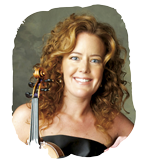 The violin artistry of Desirée Ruhstrat has captivated audiences throughout Europe and the Americas. The Berlin Taggespiegel wrote, "…she played with such an intensive fire and sleepwalking assuredness that she was stormily celebrated by the audience." A seasoned performer, Ms. Ruhstrat made her professional debut at the age of twelve with Lukas Foss and the Milwaukee Symphony Orchestra and at age 16, Ms. Ruhstrat was invited by Sir George Solti to perform Tchaikovsky's Violin Concerto in Chicago's Orchestra Hall.

Ms. Ruhstrat has appeared as a soloist with orchestras throughout the world, including the Berlin Radio Symphony, Radio Suisse Romande, Gottingen Symphony, Philharmonia Da Camera,  Orchestra Symphonica Auguescalientes, Colorado Symphony, Oregon Symphony, Concerto Soloists Of Philadelphia, Utah Symphony, Chicago Civic Orchestra,  Debut Orchestra of Los Angeles,  and National Repertory Orchestra.  She has worked with such renowned conductors as Eric Kunzel, Max Rudolph, William Smith, Rico Saccani, Brian Priestman, Mats Liljefors among others. Ms. Ruhstrat has won numerous awards including first prize at the National Young Musicians Debut Competition in Los Angeles, where she was also lauded a special award for a young performer with extraordinary talent. She became the youngest prizewinner at Switzerland's Tibor Varga International Competition and also won the award for best interpretation of the commissioned contemporary composition. She went on to earn top prizes at the Carl Flesch, Julius Stulberg, and the Mozart Festival Violin Competitions.

Ms. Ruhstrat's distinguished career as a chamber musician includes performances throughout the US as a member of the Lincoln Trio, including Carnegie Weil Hall, Ravinia Festival,  Indianapolis Symphony Beethoven Series,  Poisson Rouge and Music IN the Loft. She has also appeared as guest artist of the Chamber Music Series of the Philadelphia Orchestra, Colorado Symphony, Apollo Chamber Ensemble, the Colorado Chambers Players, Pacifica Quartet, the University of Oklahoma, Wisconsin, Tennessee, and Northwestern University Midwinter Series with Jorge Federico Osorio and Ani Kavafian, as well as collaborations with Shmuel Ashkenasi, Ilya Kaler and Roberto Diaz. Festival appearances include the Aspen Music Festival, Peninsula Music Festival, Laurel Festival of the Arts, the Breckenridge Music Festival and the Green Lake, University Of Wisconsin, Utah Music Festival, and ARIA International Summer Academy, where she has also served as faculty.

A champion of new music Ms. Ruhstrat has worked with some of the worlds leading composers, George Crumb, Jennifer Higdon,  Shulamit Ran, Augusta Read Thomas,  Chen Yi,  Zhou Long  and most recently had a work written for her by Laura Elise Schwendinger  "Violinists In My Life."

Ms. Ruhstrat is a graduate of the Curtis Institute of Music. Her teachers have included Aaron Rosand, Joseph Gingold, Harold Wippler and Dorothy Delay. Her discography includes the Stamitz Duo for Violin and Viola for Centaur Records ,the Ravel Duo for Violin and Cello for Albany Records, and multiple recordings with the Lincoln Trio on the Cedille and most recently a  2013 NAXOS release Annelies,  based on the Diary of Anne Frank.

A passionate teacher, Ms. Ruhstrat’s students are prizewinners of national and international competitions and members of professional orchestras worldwide. Ms. Ruhstrat currently is adjunct Faculty at the Jacobs School of Music at Indiana University Bloomington.

Gil Shaham with the BBC Symphony under David Robertson.

Fratres in its version for solo violin, string orchestra and percussion, which will be performed at this concert. The violin soloist is Caitlin Kelley and Case Scaglione leads the Young Musicians Foundation Debut Orchestra

Aaron Copland has long enjoyed a revered place as the composer who exemplifies American music. Yet his early works were for the most part greeted with scorn and derision. A famous conductor told the audience at the 1925 premiere of the Symphony for Organ and Orchestra that “…if a gifted young man can write a symphony like this at twenty-three, within five years he will be ready to commit murder!” Most of the works which have brought Copland his iconic status—such as Appalachian Spring, Rodeo, The Red Pony, Fanfare for the Common Man—date from his “Americana” period of 1936–1948. The first of these popular works was El Salón México (1936), inspired by a trip to Mexico in 1932 which included visits to the Mexico City dance hall which gave this piece its title. Copland took four Mexican folk songs from printed collections and assembled them into a colorfully orchestrated and rhythmically exciting tone picture.

FRATRES FOR VIOLIN AND ORCHESTRA

This concert marks the first time the ESO has performed a work by Arvo Pärt, born in Estonia but for many years now a resident of Berlin. Pärt composed in an extreme modernist style until 1968, when he began to totally rethink his compositional methods and how his music related to his deep Russian Orthodox faith. Between 1968 and 1976 he composed but one piece, his Third Symphony, and in 1976 he began his current style with a very short piano piece titled For Alina.

In 1977 he completed three major works: Cantus in Memory of Benjamin Britten, Tabula Rasa, and the first version of Fratres (Brethren), featured on today’s program. He has subsequently redone Fratres for numerous instrumental combinations; the version for solo violin, string orchestra and percussion heard today dates from 1992. Pärt’s name for his compositional style is tintinnabuli, referring to the ringing of bells. He has written about this method as follows:

“I have discovered that it is enough when a single note is beautifully played. This one note, or a silent beat, or a moment of silence comforts me… I build with the most primitive materials-with the triad, with one specific tonality. The three notes of a triad are like bells. And that is why I call it tintinnabulation.”

Fratres has become one of Pärt’s most popular works, indeed one of the most frequently performed pieces of music composed in the past 50 years. It boasts more recorded versions than any other work on today’s program and has been included in the book 1001 Classical Recordings You Must Hear Before You Die.

CONCERTO FOR VIOLIN AND ORCHESTRA

Samuel Barber came to fame in 1938 when Arturo Toscanini conducted a string orchestra arrangement of the adagio movement from the String Quartet, Op. 11 under the title Adagio for Strings. The instant success of this now-iconic American work led the next year to a $1000 commission for Barber to compose a concerto for a young violinist, Iso Briselli, the adopted son of Samuel Fels, who owned a business which manufactured soap. (Barber at times referred to this work as his “concerto di sapone,” or soap concerto). There were definite artistic differences between Barber and Briselli concerning the possible lack of virtuoso passages in the first two movements and also over whether the solo part of the finale could be played at all. These differences led Fels to threaten non-payment of the fee, and it is unclear whether Barber received $500 or the full $1000. There is no dispute, however, of the melodic beauty of the first two movements or the excitement of the finale.

Andante. The solo oboe sings the beautiful main theme of the slow movement, but the solo violin does not play this melody for about four minutes. Barber’s model here may have been the slow movement of the Brahms Violin Concerto, which also follows this pattern.

Presto in moto perpetuo. The finale is only three to four minutes long and brings the concerto to a virtuosic close.

Howard Hanson was born in Wahoo, Nebraska of Swedish ancestry. He received a degree in music from Northwestern University in 1916, and was best known as the head of the Eastman School of Music in Rochester, New York from 1924 to 1964. His Symphony No. 2 “Romantic” was commissioned by Serge Koussevitzky and the Boston Symphony Orchestra for its 50th anniversary season in 1930, one of many works which have achieved repertory status from this project. The “Romantic” Symphony is Hanson’s best known work and has maintained its repertory status since its 1930 premiere.

Adagio. A slow introduction based on a rising three note motto leads to a fanfare on the horns and a quicker main theme on the brass. The second theme of this movement (on the strings) is the lush, somewhat sentimental melody that has become known as the “Interlochen theme” because it closes each concert at this Michigan summer music camp. It also recurs in each of the later two movements and may be considered the main theme of the entire symphony.

Andante con tenerezza. This slow and tender movement is primarily based on the soft woodwind chords with which it begins.

Allegro con brio. The only truly fast movement of the symphony opens with a rousing horn theme; the horns play a very prominent role throughout the symphony, which is fitting for this most “romantic” of instruments. The symphony closes with a final glorious restatement of the “Interlochen theme.”