ESO favorite Irina Muresanu returns in one of Prokofiev’s most lyrical inspirations, the Second Violin Concerto, which was composed while he was also working on his great ballet Romeo and Juliet. The program opens with Mozart’s effervescent Overture to The Marriage of Figaro and concludes with Gustav Mahler’s Symphony No. 1, whose huge orchestra and triumphant finale have led many to believe that it is the greatest of all first symphonies.

This concert is dedicated in memory of our long-time General Manager (and friend) David Ellis.

All patrons are required to be fully vaccinated, including a booster, and are required to show proof of vaccination (read more detail) to attend our 2022-23 subscription-series concerts. For the comfort and safety of everyone, masks also continue to be required for our performances. The ESO may make changes to vaccination/masking policies depending for future events. 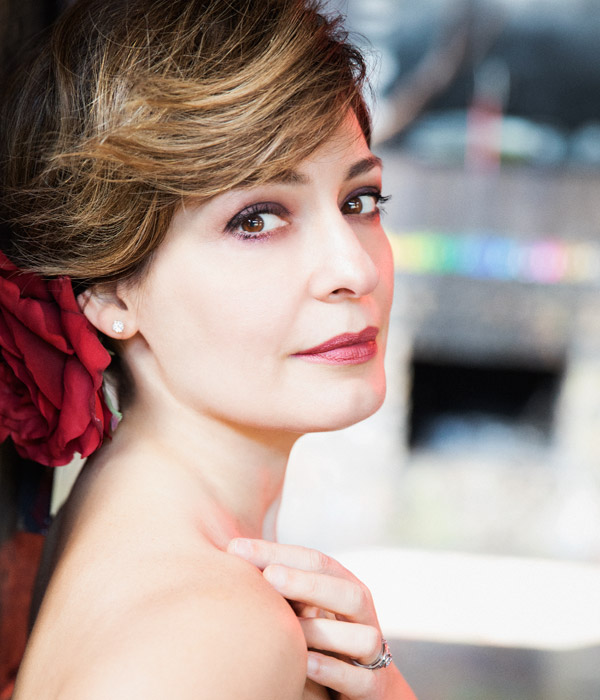 Meet our soloist, Irina Muresanu, at Musical Insights. She and our Maestro Lawrence Eckerling will explore the concert program in depth.

On November 11, 1785, Leopold Mozart complained that he had scarcely heard from his son Wolfgang: “He is up to his eyes in work on his opera The Marriage of Figaro, ” he wrote. Lorenzo Da Ponte, Wolfgang’s librettist, later recalled the whirlwind pace of their collaboration: “As fast as I wrote the words, Mozart set them to music. In six weeks everything was in order.” That is no doubt sheer exaggeration—by a man often given to overstatement—but much of the four-act comic opera apparently was composed between October 16, when Mozart finished his great piano quartet in G minor, and December 1.

The Overture to The Marriage of Figaro was left till the very last moment, as was Mozart’s custom. The manuscript is dated April 29, 1786, the same day he entered the work in his personal catalog of compositions. By then, the orchestral parts for the opera had been copied and rehearsals had started. Figaro opened on May 1 at the Burgtheater in Vienna, with the composer conducting from the keyboard. It was well received there, and after it was given in Prague that December, Mozart enjoyed a popularity seldom known to composers during their lifetimes. “Here they talk about nothing but Figaro, ” he wrote when he visited Prague in January. “Nothing is played, sung, or whistled but Figaro. No opera is drawing like Figaro. Nothing, nothing but Figaro. ”

T he overture is a perfect curtain raiser. It crackles with excitement and is full of promise. The combination of frantic music and a hushed tempo suggests intrigue and conspiracy from the start; the warm glow of horns and winds assures us that this is, above all, a comedy. The pace is unrelentingly fast (we now know that Mozart tore up a page of slower music he intended as a contrasting middle section), but there is, nevertheless, an undercurrent of complexity. Mozart knew only too well that the human heart is animated by complicated attachments and great expectations.


Prokofiev fled Russia in 1918 due to the Communist Revolution and supported himself as a pianist and composer for a number of years, primarily in the U.S. and in France. However, he eventually tired of this peripatetic existence, and as he told his son Sviatoslav “I didn’t like to be Russian composer No. 2 in Europe after Stravinsky, and No. 2 in the U.S. after Rachmaninoff. I liked to be No. 1 and that’s why I chose Soviet Russia.” Prokofiev also had begun discussions with the Kirov to compose a full-length ballet to the story of Romeo and Juliet, which would become his Opus 64 and his greatest ballet. He also received a commission for a new violin concerto, his final western European composition, which became his Opus 63. Scholarly study of his sketchbooks has revealed the extent to which the violin concerto and the ballet shared themes and their general affects.

The concerto is composed for a relatively small orchestra of pairs of winds, including horns and trumpets, and a large variety of percussion instruments with a single player.

I.  Allegro moderato.  The solo violin states the rather dark main theme prior to the entrance of the orchestra. The extremely lyrical second theme could easily serve as love music in the Romeo and Juliet ballet.

II.  Andante assai. A rising three note figure in the clarinets prepares for the soloist to enter with another flight of lyricism reminiscent of Romeo and Juliet . A faster section with lower dynamics provides contrast, and this quicker music then alternates with the lyrical melody.

III.  Allegro: ben marcato.  The finale is typical of what Prokofiev referred to as his “motoric” style. The percussion, particularly the bass drum and castanets, play a leading role as the concerto builds to a tumultuous close.

Today Gustav Mahler is recognized as a great composer whose music helped bridge the transition from the Austro-Hungarian tradition into early 20th century modernism and exerted a profound influence on his musical descendants. Such was not the case during his lifetime, however, when controversy, depression and anti-Semitism (especially in Vienna) dogged his footsteps. He was misunderstood musically, and his own behavior and temperament frequently made matters worse.

As his health deteriorated, Mahler continued to compose and conduct, against his doctor’s orders, with almost suicidal intensity knowing he was doomed. Even after his death, his music was generally received with such disdain that only a few persistent conductors such as Bruno Walter and Otto Klemperer bothered to schedule performances of his compositions for decades. But at the time of his Centennial observances in 1960, a dramatic turnaround was developing. Mahler became something of a trademark composer for our age, a prophet of the turmoil and change which became so pervasive in the last half of the 20th century. A whole new young audience emerged, who could identify with the panic, terror, and poignant humanity which characterize his music.

A gifted composer of songs, Mahler often used voices as an integral part of his massive symphonies, or, as he does in the First Symphony, he utilized music from one of his song cycles, “Songs of a Wayfarer.”

Mahler conducted the premiere of the Symphony No. I in 1889 at the invitation of the Budapest Philharmonic, thus marking the first public performance of a Mahler work.

I.   The Symphony begins softly, imitating the cuckoo at dawn and leading into the main theme, based on “O’er the Fields I Went at Morn,” from the Wayfarer cycle. It is a youthful movement—that is, both fresh and brash.

Ill.   The third movement is a cynical parody of a funeral march, based on the French round, “Frère Jacques,” placed hauntingly beside the last of the Wayfarer songs. The composer was recovering from a failed love affair when he wrote the song cycle, and apparently worked it out in music.

IV.  With almost no pause, the finale breaks open the heavens with a fiercely passionate outburst which will touch on themes from previous movements before concluding with a chorale which promises hope.

Mahler had a superstitious fear of death, and yet he hoped for redemption, and the finale of this First Symphony seems to reflect both sides of this very complex individual.