Michelle Areyzaga returns to the ESO in Richard Strauss’ final work, his beautiful tribute to the soprano voice the Four Last Songs. Brahms’ Third Symphony is a cornerstone of the concert repertoire, with an opening theme expressing his personal motto “free but happy” and an instantly memorable folksong-like third movement. Wagner’s Overture to Tannhäuser will provide a sonorous and brassy conclusion to this program of favorites by German composers. 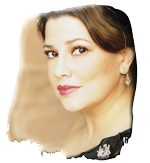 A diverse and coveted singer, American soprano Michelle Areyzaga is in demand among highly regarded orchestras and opera companies throughout the United States and abroad. She has performed operatic roles with New York City Opera in Telemann’s Orpheus as well as in their VOX series, and has appeared in leading roles with Chicago Opera Theater, Lyric Opera of Chicago’s In the Neighborhoods programs, Opera Birmingham, Ravinia Festival, and Orquesta Sinfónica del Estado de México.

Known as a foremost interpreter of vocal art song and chamber music, Ms. Areyzaga has been a repeat guest of the New York Festival of Song under the direction of Steven Blier and Michael Barrett, the Chamber Music Society of Lincoln Center, the Chicago Ensemble, as well as Chicago’s Dame Myra Hess Memorial Concert Series, and the Tucson Desert Song Festival. She has collaborated with the Avalon String Quartet, the Cavatina Duo, and the Lincoln Trio, and has been selected to perform world premieres of many new works by American composers.

As a recorded artist, she has performed song cycles by Gwyneth Walker on The Sun Is Love (Proteus). Other recordings include Songs from Spoon River (Cedille) by Lita Grier and The Small Hours, songs by William Ferris. She has sung numerous times in both live and programmed broadcasts on Chicago’s classical music radio station WFMT.

Anja Harteros is the soprano with the Bavarian Radio Symphony under Mariss Jansons.

Brahms conducted the premiere of his Third Symphony with the Vienna Philharmonic in 1883; it was one of the greatest triumphs of his life, and the Third has been a staple of the repertory ever since. This is the shortest of the four Brahms symphonies and the only one to end quietly; in fact it was the first four movement symphony in the standard repertory to end softly.

Allegro con brio. The symphony begins forcefully and dramatically with its first three chords spelling out a motto-FAF- which recurs throughout the symphony. Brahms meant this as an acronym for the words “Frei Aber Froh”, or “Free But Happy.” (This is in contrast to the motto of his friend Joseph Joachim- “Frei Aber Einsam”, which means “Free But Lonely” and is spelled musically as FAE.) The principal tonality is F Major.

Andante. This C Major slow movement is among Brahms’ loveliest. Its second theme, played by the clarinets and bassoons after about two minutes, will recur at three important points in the final movement.

Poco allegretto. Among the most recognizable sections of Brahms’ symphonies, this C Minor movement is slow and gentle and may remind some of Brahms’ famous Lullaby.

Richard Strauss won quick fame in his twenties as a composer of symphonic poems such as Don Juan and Death and Transfiguration, followed by Also Sprach Zarathustra and Ein Heldenleben, among others. He then turned to opera and wrote such staples as Salome, Elektra, and Der Rosenkavalier. Few of his subsequent works are played with great frequency with the exception of those composed after World War II. Strauss had remained in Germany during the Nazi era, although not a supporter of the regime, and he was very unhappy with its destruction of German art and music. Strauss’ principal post-war works include the Oboe Concerto, the Metamorphosen for Strings, and his final composition, the Four Last Songs (1948).

Strauss loved the soprano voice; he created his principal operatic roles for sopranos, and was married to one, Pauline De Ahna, for over fifty years. Pauline lived for only a few months after Strauss’ death in 1949, and died only nine days before the premiere of the Four Last Songs in 1950.

The poems set in the Four Last Songs (texts and translations shown two pages farther on) are by Herman Hesse and Joseph von Eichendorff. Strauss uses a large Romantic orchestra, but with great restraint and with important roles for the concertmaster, the two flautists, and the horn section. The first two songs begin with spring, followed by September and the last days of summer. At the end of the second of the three verses of “Going to Sleep” the concertmaster plays a soaring solo which is immediately followed by the soprano’s third verse to this same melody. The last word of the final song “At Sunset” is “tod” or “death”; here Strauss quotes in the violas and solo horn the “transfiguration” theme from his Death and Transfiguration of 60 years earlier. The last sounds from the orchestra are trills on two muted piccolos representing two larks circling in the twilight air.

Richard Wagner was arguably the most influential composer of the 19th century, and certainly the leading composer of German operas, of which he wrote 13. Tannhäuser, premiered in Dresden in 1845, was his fifth opera and is set in a Middle-age milieu of knights and song contests, with Wagner’s customary theme of the redemption of a man through the love of a woman.

The Overture to Tannhäuser is based on three important themes from the opera. The “Pilgrim’s Chorus” opens the overture, played first on pairs of clarinets, bassoons and horns before expanding into a majestic statement on the trombones. The central section of the overture consists of alternations of the sensuous music which accompanies Tannhäuser’s dalliance with the temptress Venus in her lair of Venusberg, and of Tannhäuser’s song praising Venus and carnal love. The final statement of the sensuous “Venusberg” music is marked by the entry of the tambourine, cymbals and triangle, and then leads through a long build-up to a final brassy climax of the “Pilgrim’s Chorus.”

The concert piece known as the “Overture and Venusberg Music from Tannhäuser” replaces the final statement of the Pilgrim’s Chorus with the ballet music Wagner composed for the 1861 Paris performance of the opera. The eminent music writer Donald Francis Tovey assessed this later version as “a monster without its Loch Ness. Nobody can tell how many humps it has nor what purpose they serve.” He goes on to say about the original 1845 Dresden version of the overture “…where it means to be holy and humble it is predestined to a… tub-thumping end, and of that end I would not see it deprived. As a whole it is not good music, but it is very good bad music.” It is this “tub-thumping end” which concludes today’s concert.