Silver Linings in a Pandemic

Silver Linings in a Pandemic

Thursday, March 12, 2020. Violinist Irina Muresanu was taking a walk in Evanston, a town she dearly loves. She had arrived here two days earlier and had rehearsed with the ESO that evening in anticipation of the concert on Sunday, March 15. Her performance of Prokofiev’s Violin Concerto No. 2 was to be the highlight of the program. In addition, she, Maestro Eckerling, and ESO General Manager David Ellis had prepared a program for the pre-concert lecture series, “Musical Insights,” for Friday, March 13 at The Merion in downtown Evanston. Then her phone rang. It was Larry Eckerling. The concert was canceled. A virus had taken control of our lives.

Another disappointment awaited Irina when she arrived home. Her husband, an emergency room physician, was very concerned by what he was seeing at his hospital. While not usually an alarmist, he had strongly suggested a few weeks earlier that Irina’s aunt, who was visiting from Romania, should cut short her trip and return home as quickly as possible. He had rightly anticipated travel restrictions and border closings. Now he was insisting that Irina and their son, Victor, 11, go to a farmhouse the family owns in Maine. Irina was very reluctant to leave home but finally agreed. “We packed for three weeks,” she said. “We stayed for six months!”

When Irina and Victor left for Maine, the University of Maryland, where Irina is Associate Professor of Violin, was on spring break. The University announced that classes would be online until April 13 and extended the break for a week to give faculty time to make the transition. Irina says that she was happy to be in a time and place where such a transition was possible because the technology allowed academics in music to continue teaching and connecting with students, the first of several silver linings in the pandemic.

During her first two months of teaching online, “when things were unraveling,” Irina was able to put a system in place that actually gave her students more class time than they would normally have had. Her graduate students acted as mentors and teaching assistants for her undergraduate students and an online studio was held once a week where the students played for one another. This studio was very intimidating for many, so Irina came up with “magic tricks” to put them more at ease. The class favorite was introducing all the pets in their lives, which broke the formality of the class and was easy since everyone was at home rather than on campus. A silver lining for both students and teacher.

Irina recognizes that she was extremely fortunate to have had the freedom to go to a safer environment during the pandemic. Victor managed to adjust to online classes and Irina managed to adjust to a routine that did not involve packing, flying, and playing a concert. It was, for a time, a parallel existence. She made it a point to explore the many trails near their farmhouse with Victor and his dog, Baby, his guardian since infancy. More quality time with Victor was one of the best silver linings of all.

The pandemic had a gradual, but inexorable, impact on Irina’s performance schedule. March concerts were canceled with the thought that they could perhaps be rescheduled for June; then June concerts were canceled; then entire seasons were lost. Summer festivals were canceled, as were recitals and master classes. Even so, Irina was fortunate to have had the chance to perform in November. She and nine other musicians were socially distanced on a stage in a 700-seat concert hall, where their performance was recorded and then broadcast. Irina does admit, however, that after such a drought in live performances she was more nervous than usual before a performance. “I was so nervous that I practiced like a student, like a middle school kid!” (The performance got excellent reviews!)

We asked Irina if there were projects she had to put on hold and others that presented opportunities. It turns out there were both. The editing of a recording was postponed for practical reasons: when a CD is released, musicians count on concerts, recitals or even smaller release parties to promote their work; none of these had been possible during the past year, so the CD is back in the pending file.

For her second project, Irina received a teaching innovation grant: students in her string pedagogy and chamber music classes give lessons to children in underserved neighborhoods that adjoin the University.

As for post-pandemic plans, when we find ourselves in what will pass for “normal,” Irina said she loves living out of a suitcase and is looking forward to getting back to a routine of concerts, recitals, and summer festivals. She added that she wishes there was more government support for the arts like there is in Europe. Here, unfortunately, some arts organizations may not survive. She is also looking forward to resuming in-person teaching with her students, about whom she is passionate. “In fact,” she said, “I teared up a week ago when I was coaching a piano quintet and heard them play. I again felt relevant as an academic.”

Finally, we asked Irina if the pandemic has changed her approach to music or even changed her. Irina said that she, like most musicians, had questioned at various stages of her life whether music was the right path. “However, every time I was lucky to find an intersection that made choosing the music path a reason to exist. But after a year, who knows what will happen? The biggest silver lining is that I’ve realized I’m in this for the long haul, that I want to stay a musician. Even without concerts and that lifestyle, I’ve found ways to continue. It’s a huge sense of relief and happiness to know that I can wake up every day and might not be able to finish everything I want to get done!” 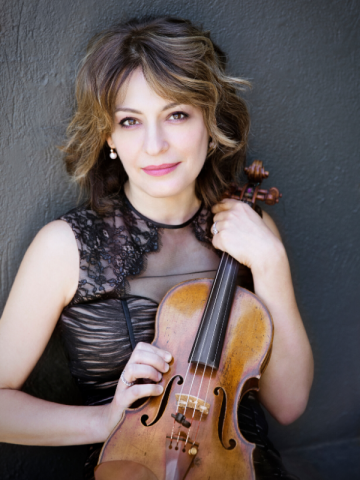