Our 74th season opens with a program combining Nordic masterpieces with the talents of Mindy Kaufman, Solo Piccolo and Flute of the New York Philharmonic Orchestra, who will solo in both Vivaldi’s best known piccolo concerto and Carl Nielsen’s Flute Concerto. Two masterpieces by Finland’s Jan Sibelius will open and close the concert: Finlandia and the passionate First Symphony. 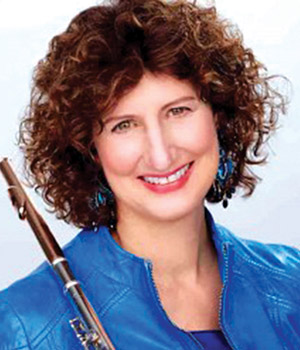 Mindy Kaufman, The Edward and Priscilla Pilcher Chair, joined the New York Philharmonic as flute and solo piccolo in 1979 at the age of 22, after performing for three seasons with the Rochester Philharmonic Orchestra. She received a bachelor of music degree from the Eastman School of Music, where she studied with Walfrid Kujala, Bonita Boyd, and James Galway.

Ms. Kaufman has appeared as a soloist with the New York Philharmonic under former Music Directors Zubin Mehta, Kurt Masur, and Lorin Maazel. For one season she substituted as principal flute with the Milwaukee Symphony Orchestra.

Ms. Kaufman teaches at the Shanghai Orchestra Academy. She gives master classes around the world, and has taught at Columbia University, Mannes Prep, and as a substitute teacher at Juilliard Pre-College.

Ms. Kaufman recorded Avner Dorman’s Piccolo Concerto with the Metropolis Ensemble, Vivaldi’s Piccolo Concerto with New York Philharmonic, and a solo CD, French Flute Music. She has performed at the National Flute Convention, Japan Flute Convention, and the New York Flute Club. She can be heard on dozens of film soundtracks, including The Cotton Club, The Untouchables, Aladdin, Julie & Julia, and Moonrise Kingdom.

Meet our soloist, Arnaud Sussman, at Musical Insights. He and our Maestro Lawrence Eckerling and David Ellis will explore the November concert program in depth.

Finlandia by Sibelius with the Sinfonia de Galicia conducted by Dima Slobodeniouk.

FINLAND AWAKENS. “Sibelius was not merely the most famous composer Finland ever produced but the country’s chief celebrity in any field.” (Alex Ross; The Rest is Noise). What we now know under the title Finlandia was the final section of six tableau representing the progress of Finland from the darkness of 1800 to the light of 1899. The sponsor of these tableau was the Finnish Press Association, which was delivering an implicit protest against Russian censorship (Finland was a Grand Duchy of Tsarist Russia). The original title was Finland Awakens, but its immediate popularity led to its publication in 1901 as Finlandia.

The music itself encapsulates the overall theme of the six tableau: the powerful and dark introduction leads to a driving major key section which some have conjectured is a musical analogue of a steam locomotive. The best known part of Finlandia is the succeeding “hymn”, a melody which subsequently was used for many different sets of words such as “On Great Lone Hills” or ”O Mighty Land”. The piece ends with compressed reprises of both the driving music and the hymn. Sibelius and Finlandia were extremely popular in the US during the 1930s, exemplified by this vignette from the famous New York World Fair of 1939. The Fair buried a time capsule, meant to remain unopened for 5000 years, which contained many items representing American life. “American” music was represented by Sousa’s Stars and Stripes Forever, the swing piece Flat Foot Floogie, and a phonograph record and score of Finlandia.

A RARE CONCERTO IN TWO MOVEMENTS. Carl Nielsen is generally considered the leading composer in the history of Denmark and was a close musical contemporary of Sibelius- both had completed their output of major compositions by 1928. The year 1922 marked two important influences on the eventual composition of the Flute Concerto. The more obvious factor was the premiere of his Wind Quintet, composed for the Copenhagen Wind Quintet, whose performance led him to promise to write solo concertos for each of its members. The Flute Concerto of 1926 and the Clarinet Concerto of 1928 were the only ones actually written before ill health ended his ability to compose. Also in 1922 was the premiere of his great Fifth Symphony (of a total of six), which he structured in two movements rather than the four movements typical of most symphonies. The Flute Concerto is also in two movements, rather than the three movement form of almost all concertos. The unusual instrumentation of this Concerto sets the solo flute against pairs of the other members of a wind quintet (oboe, clarinet, bassoon, and horn), solo trombone, timpani and strings. The trombone assumes an increasingly important role in the second movement; its contrasting timbre to that of the flute may be a humorous allusion to the refined tone of the French-trained Danish flutist, Holger Gilbert- Jespersen.

ONE OF OVER 500 CONCERTOS IN THREE MOVEMENTS. Antonio Vivaldi, one ofhistory’s mostprolific composers, has been called by Richard Taruskin “The main protagonist and establisher of the three-movement soloistic concerto”. During his years (1703-1740) supervising the music program of a Venetian orphanage for girls, he composed over 500 concertos, with about 230 for violin, 37 for bassoon, but only three for piccolo. The concerto on this program is the best known of the three; the RV 443 refers to its listing in the catalogue compiled by Peter Ryom, which is based on musical genre rather than chronology. The Concerto is typical of the three movement form, with two outer fast movements and a slower second movement, but is less typical in its virtuosic demands of the piccolo soloist.

FINLAND’S FIRST SYMPHONY.  In 1935 the New York Philharmonic surveyed its nationwide radio audience and asked them to cast two votes- who is your favorite composer and who is your favorite living composer. The winners were Beethoven and Sibelius, respectively; the popularity of Sibelius was never higher than in the 1930s, particularly in the U.S. and Great Britain. By then he had completed all seven of his symphonies, which were considered by many the greatest since the nine of Beethoven. Sibelius’ First Symphony is the earliest symphony by a Finn in the standard repertory, and it was one of the first symphonies in the key of E Minor. (The first significant symphony in that key was the Fourth of Brahms in 1885).

I. Andante, ma non troppo- Allegro energico. A slow introduction featuring the clarinet over a soft timpani roll leads to a vigorous main theme for the strings. The contrasting subsidiary theme is introduced by the woodwinds, particularly the flutes. A standard development and recapitulation follow and the movement ends with two soft pizzicato chords for the strings.

II. Andante (ma non troppo lento). The slow movement begins with a somber string theme with builds to a stormy central section, in the emotional style of Tchaikovsky.

III. Scherzo: Allegro. The fiery scherzo features pizzicato strings and a  timpani part similar in its prominence to that of the scherzo of Beethoven’s Ninth Symphony.

IV. Finale: (Quasi una Fantasia). The introduction to the finale uses virtually the same theme as that of the introduction to the first movement, but is more richly orchestrated. The energetic main theme features all of the percussion battery; this is the largest orchestra used in any of the Sibelius symphonies. The second theme is one of the most beautiful melodies in any symphony, but its full effect is only experienced later, in its reprise after the development of the principal theme. The coda of the symphony abruptly halts the beautiful melody with a return to E Minor ending with the same two soft pizzicato notes which concluded the first movement.