George Gershwin’s Piano Concerto in F has retained its pre-eminent status as the most popular American piano concerto since its 1925 premiere, and is a specialty of virtuoso Jeffrey Biegel. Another American classic favorite, Grofé’s Grand Canyon Suite, had its 1931 premiere in Chicago, and the clip-clop rhythm of its “On the Trail” movement was actually inspired by the sounds of pile drivers along Lake Shore Drive. George Walker’s lovely Lyric for Strings and Jonathan Newman’s short rock-inspired overture round out this all-American program. 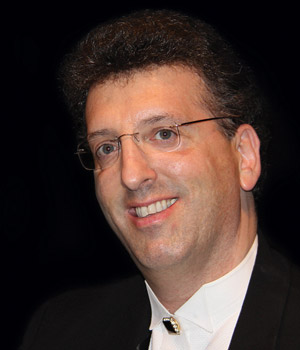 Since 1999, Jeffrey Biegel has commissioned ten composers to bring new music for piano and orchestra to the repertoire. On February 10, 2019, Kenneth Fuchs's Piano Concerto: Spiritualist with the London Symphony Orchestra led by JoAnn Falletta garnered a Grammy win in the Best Classical Compendium category, featuring Mr. Biegel as its soloist.

Among his recent recordings and performances, Mr. Biegel performed the World Premiere of Giovanni Allevi's Concerto for Piano and Orchestra with Orchestra Kentucky and in Milan's Teatro dal Vermes, recording it with Orchestra Sinfonica Italiana. During 2018 he performed the World Premiere of Christopher Theofanidis's Piano Concerto no. 2 with the Harrisburg Symphony Orchestra, Stuart Malina conducting. In 2019, Grammy winning composer Dick Tunney unveiled the new Peanuts Concerto for piano and orchestra based on music by Vince Guaraldi with Orchestra Kentucky and Mr. Biegel. In further championing pop music icons, Mr. Biegel has brought Jimmy Webb's Nocturne for Piano and Orchestra to the public and, PDQ Bach's Concerto for Simply Grand Piano and Orchestra by Peter Schickele with the Colorado Symphony Orchestra. The first solo digital recording on Mr. Biegel's Naturally Sharp label was released in 2019, and, in 2020, he will premiere Jim Stephenson's first piano concerto, tentatively titled, Water - in both its life-sustaining and destructive forces.

Mr. Biegel's 1986 New York recital debut was as the third recipient of the Juilliard William Petschek Piano Debut Award. He studied at The Juilliard School with Adele Marcus, herself a pupil of Josef Lhevinne and Artur Schnabel, and is currently on faculty at the Conservatory of Music at Brooklyn College, a City University of New York (CUNY). Moravian College in Bethlehem, PA, conferred the Honorary Degree of Doctor of Humane Letters upon Mr. Biegel for his achievements in performance, recordings, chamber music, champion of new music, composer, arranger and educator.

George Walker's beautiful Lyric for Strings from the 2017 BBC Proms.

"On the Trail" from Ferde Grofe's Grand Canyon Suite.

BLOW IT UP, START AGAIN

AN OVERTURE OR AN ENCORE. Jonathan Newman was trained as a pianist, trombonist, and singer and holds degrees from Boston University and the Juilliard School. This wide background has resulted in works which incorporate styles of pop, blues, jazz, folk, and funk into otherwise classical models. He is the Composer-in – Residence for the Chicago Youth Symphony Orchestra, for whom he composed Blow It Up, Start Again. Newman attached a brief statement to explain the title: “If the system isn’t working anymore, then do what Guy Fawkes tried and go anarchist: Blow it all up, and start again.” This short piece was commissioned as an encore, and thus is musically not anarchistic at all; it blends elements of rock such as a drum kit with blues chords, jazz band trombones and a traditional orchestra to create either a rousing encore or an overture.

SEQUEL TO ADAGIO FOR STRINGS. George Walker, who died last year aged 96, was among America’s most honored and respected composers. His list of “firsts” for an African-American composer is too long to cite in full here, but highlights include first graduate of Oberlin Conservatory and the Curtis Institute, solo instrumentalist with the Philadelphia Orchestra, and the Pulitzer Prize in Music (1996 for Lilacs). Walker’s extensive academic career included posts at Smith College, Colorado University, Rutgers University and the Peabody Institute.

The Lyric for Strings is an arrangement for full string orchestra of the slow movement of his String Quartet No. 1 composed in 1946. Its original title was Lament, an allusion to its dedicatee, the composer’s grandmother, who had died the year before. The work’s beauty and its derivation from a string quartet mark a definite kinship with Samuel Barber’s Adagio for Strings (1938). A footnote for local radio listeners: when classical radio station WNIB went of the air the final music broadcast was Walker’s Lyric for Strings.

SEQUEL TO RHAPSODY IN BLUE. George Gershwin, already a highly successful composer of “Tin Pan Alley” popular songs, attained instant fame in classical music with his Rhapsody in Blue. Among those attending its 1924 premiere was the conductor of the New York Symphony, Walter Damrosch, who was so impressed that he commissioned Gershwin to write a full fledged piano concerto. Gershwin was highly enthusiastic about the commission because the orchestration of Rhapsody in Blue had been by Ferde Grofé, and Gershwin wanted to advance as a classical composer by orchestrating his own works. Gershwin spent one month to write each of the three movements plus another month to orchestrate the entire work, which was premiered in December 1925 with Gershwin as soloist and the New York Symphony conducted by Damrosch.

I.Allegro.   Although the concerto observes the outlines of standard structural form, its strength is due primarily to Gershwin’s ability to compose immediately appealing melodies. The arresting introduction features a timpani and percussion theme which will recur at the very end of the last movement. Alternating string chords, which Gershwin referred to as a “Charleston rhythm” follow and this rhythm will pervade the rest of the concerto. The bassoon delivers the “official” first theme; the official second theme is delayed until the dramatic entrance of the piano soloist. The two main themes and the Charleston rhythm alternate throughout the remainder of the movement until all three converge at its conclusion.

II.Adagio- Andante con moto. Gershwin referred to the slow movement’s “Mozartian simplicity” and nocturnal tone, meaning its bluesy opening trumpet solo. The movement continues with a sprightly string/piano passage and reaches its climax with a grandly Romantic section similar to that in Rhapsody in Blue.

“THE PLACE I MEAN IS LARGE, VERY LARGE…” Grofé was of German heritage; his given name was Ferdinand Rudolph von Grofé. Born in New York City, he was musically educated in Germany and learned to play numerous instruments, which led to his first career as an arranger and orchestrator. He achieved instant fame with his 1924 orchestration of Gershwin’s Rhapsody in Blue. His compositional specialty was orchestral suites depicting a variety of U. S. locations, including : Mississippi River, Death Valley, Hudson River, and most importantly, the Grand Canyon. In 1938 Grofé wrote a personal story of the Grand Canyon Suite, the source of the heading above. The titles of the five movements are exactly descriptive of their content, consistent with Grofé’s desire to be “completely understandable by ordinary Mr. and Mrs. John Citizen and even their adolescent offspring.” The Suite was premiered in Chicago in November 1931.

I. Sunrise. Grofé’s opening is a steady crescendo with bird calls reminiscent of Ravel’s Daphnis and Chloe.

II. Painted Desert. Mysterious harmonies in the woodwinds and piano begin and close the movement with a contrasting lyrical melody in the middle.

III. On the Trail. This most famous section of the Suite depicts the burros which carry sightseers up and down the canyon, with “cocoanut shells” used for the sound of the burros’ hooves. Grofé revealed that the theme for the burros came to him while wheeling his baby son along Sheridan Rd in Chicago and hearing the rhythm of five pile-drivers thumping in a construction project. There is an important second theme, called a “cowboy song” by Grofé,  played contrapuntally with the burro theme.

V. Cloudburst. After a recall of the “cowboy song” and a new lyrical melody on the strings, the storm approaches and bursts with full orchestral force, including a wind machine. But it eventually subsides and the moon emerges from behind the clouds. The lyrical opening melody and the “cowboy song” depict nature rejoicing in all its grandeur.